Above, at a January 12, 2016, rally thanking his voters for their support in Des Moines, Donald Trump reads the lyrics of the song “The Snake,” which he did at numerous rallies. Despite his deep respect for “the blacks,” Trump credits the song (which he calls a poem) to Al Green. It was made famous by Al Wilson and written by Oscar Brown, Jr (who, like Green and Wilson, was black).

Joel and I have been writing about the way that the Trump administration has validated and exploited centuries’ old white hatred of people of color, which they justify by fear-mongering about the threat of black and brown sexual violence against white women. This matters tremendously in that it incites violence against men of color, exploits sexual assault victims, reifies women as property, and reinforces the notion that the nation is for whites only. (That border wall is to keep out Mexican rapists, Trump tells us.)

Trump, who is a big supporter of powerful men sexually assaulting women, invokes the threat frequently. For example, he enjoys reading the lyrics of the song “The Snake.” They tell the story of a woman who rescues a half-frozen snake and nurses it back to health:

But if I hadn’t brought you in by now you might have died/Now she stroked his pretty skin and then she kissed and held him tight/But instead of saying thanks, that snake gave her a vicious bite

Trump uses the lyrics to talk about why we must reject Syrian refugees and immigrants. They are a poison that will destroy us because of our naive hospitality. It’s genetic–they can’t help it; it’s just in their nature, just as the cuckoo bird can’t help but destroy the other chicks in the nest.

But there is more: you don’t have to be Sigmund Freud or an literature PhD to understand that a snake bite (like a vampire bite) is sexual. And snakes, in particular, entice white women. 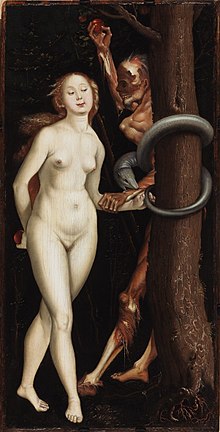 Above, Hans Baldung’s Eve, the Serpent, and Death, painted in the early 1500. The painting shows a white Eve, hiding an apple behind her back. The serpent is wound around a tree, and she grasps it with one hand as Death, hiding behind the tree, grabs her arm that grasps the serpent.

A few different fringe versions of Christianity teach a version of the Serpent Seed doctrine that says that Eve had sexual relations with the serpent, which may or may not (depending on the variety of the doctrine) may have been a real snake. The mid 20th century faith healer William M. Branham preached that Eve had sex with a creature like the “missing link,” producing Cain and causing all women from them on to carrying the literal seed of Satan inside of themselves. Not surprisingly, his theology misogynistic in other ways, too.

More worrisome is the this teaching in Christian Identity/British Israelism. Here, the “two-seed doctrine” (not to be confused with the two-seed-in-the-spirit doctrine of a very small minority of Baptists) says that Eve had sexual relations with the serpent, producing all non-white people. Various versions of this doctrine say that nonwhites are evil because of this, while others say that they are simply nonhuman–like the other nonhuman animals.

I don’t want to imply that Trump voters buy this racist theology. (They generally get enough racism at their own conservative Christian churches without having to go looking for extremist outfits.) Many of them don’t know the extremist version of it. But the mistrust of women–that they will betray us, that they can’t be trusted, that they are ruled by their appetites, that they are easily duped–continues to inform our politics, and that goes right back to the Garden of Eden.